Equality of the sexes is the state of equal access to resources and opportunities by women (regardless of their sex), and the state of valuing their needs, aspirations and behaviour. Every 8th March is International Women’s Day and with it a new theme is identified to guide the celebration and action. This year’s theme is, I am Generation Equality: Realizing Women’s Rights.

BarefootLaw, as an organisation whose primary role is to provide free legal guidance and information to the public, honours this day by highlighting the law in Uganda on the rights of women and equality, in different contexts. 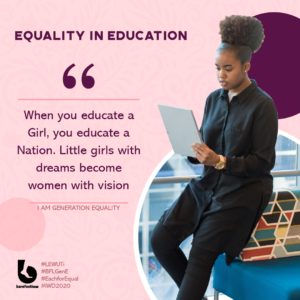 Girls and women all over the world have come a long way to acquire formal education. In many societies in Africa girls have been and are still given away for marriage once they hit puberty (12 years and above). Pedagogically, this leaves the girl to boy education ratio in these communities at 1:5.

According to the Children’s Act of Uganda, all children have a right to care and maintenance, this means proper sanitation for Girls in school during their monthly cycle is their right. This is therefore the duty of both the caregiver and school administration to provide care and maintenance looking at the factors above.

Through affirmative action, after girls finish their a highschool, they are granted extra credit in order to help them qualify for university courses, as well as encourage them to stay in school and attain a University qualification. 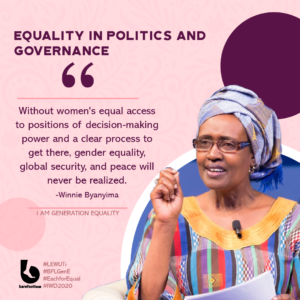 Uganda’s Constitution has made clear that the right to equal treatment between men and women extends to women’s rights to political, social and economic opportunities. A number of battles have been won, but the war is far from over: there are, still several barriers that get in the way of women participating in political life that may not be, strictly speaking, resolved by the law.

These include, but are certainly not limited to; the difference in education levels; girl-child marriage that takes girls off the education and career track; wage-gaps; and gender stereotypes such as the thinking that a woman cannot successfully debate a man, or the thinking that women are ‘too emotional for politics, among several others. These factors make it less likely for women to readily participate in political life and according to the UN Women’s statistics..

On the positive effects of increased women’s representation in politics, we are all missing out. Encourage the women in your life to take an active part in the political sphere, should they be so inclined. At the very least, pledge to not stand in their way once they indicate their intentions to do so.

EQUALITY IN THE WORKPLACE

It is no secret that women run the world (cue Beyonce). 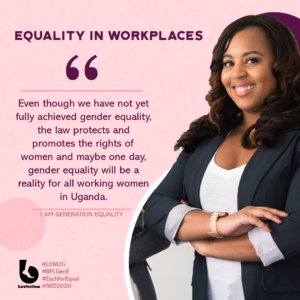 aundry and keeping the home clean while still being wives. They must try to create time for friends and family, try to do some exercise to keep fit and lose the baby weight all while still keeping up with society’s expectations of being women.  Many do all this while still going to work as professionals to provide financial support for their families.

According to the law on Employment in Uganda, both male and female employees are supposed to be paid equal renumeration for work of equal value. That means that paying a woman less for equal work is illegal as per the laws of Uganda. Additionally, discrimination of any form is prohibited. This means that not promoting a woman just because she is a woman and no other reason is an illegality in the eyes of the law.

Sexual harassment is defined as any direct or indirect request to an employee for sexual intercourse. It may also include unsolicited or unrequited sexually oriented comments or jokes of a sexual nature or even  showing physical behaviour of a sexual nature such as unwanted touching, patting, pinching or even requesting for any other form of sexual activity that contains a promise of preferential treatment or a threat about the present or future employment status of the employee if they do not accept your sexual request.

That said, it is imperative to note that though there is gender inequality at work, the law tries to level the working field and promote equality of both men and women in the Professional space. Even Though we have not yet achieved gender equality, the law protects and promotes the right of women and maybe one day, gender equality will be a reality for all working women in Uganda. 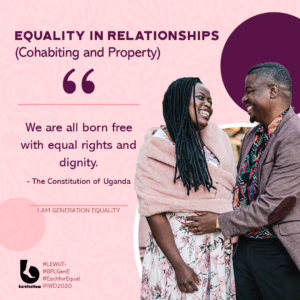 Domestic violence is where a person makes threats, injures or harms another person either physically or mentally while in each home setting. From our work in the field with the Legally Empowering Women Using Technology and Innovation (LEWUTI) project, we have found that violence affects women and children exponentially higher than men.

The Domestic Violence Act 2010 breaks down domestic violence into four categories. These are;

Physical abuse is any act or conduct that causes bodily pain, harm or danger of life, limb or health or which impairs the health or development of the victim and may include; Assault, Criminal intimidation, Criminal force, Hitting etc.

Sexual violence which harms or compromises a person’s control over their sexuality, any conduct of a sexual nature that abuses, humiliates, degrades or otherwise violates the dignity of another person and may include; forced sex, Infidelity/unfaithfulness, Forcing a sexual act against a person’s will etc.  Over 1 million women in Uganda are exposed to sexual violence of some form.

Economic violence which is about deprivation of economic or financial resources to which the victim is entitled and may include deprivation of resources that the victim requires out of necessity for his/herself and his/her children e.g health care, food and clothing and many more.

Emotional violence which is a pattern of degrading and humiliating actions towards a victim (hurts feelings) such as; repeated insults, ridicule and name- calling, Repeated threats to cause physical and emotional pain etc.

We have heard it said that many times women ask for this violence as a sign of love from their partners.  Under the law, the consent of the victim is not a defense for the charge of domestic violence under the Act.

In Uganda, the practice of cohabitation is very common and welcomed by most sections of society. It is two people living together and having a sexual relationship without being married. It is however not a recognized form of marriage.

The law protects children whether they are born when two people are cohabiting or married. Parents of these children have a duty to take care of their children by providing health care, education, safe shelter, emotional care and protection from all harm and abuse. So regardless of whether things work out or not, Michael and Evelyn are bound by law to take care of their two children until they are 18 years old.

The best proof of ownership is always registration. This means they can sit and agree on how the property should be divided and used to take care of themselves and their children. They could either sell both properties and share the profit equally, each take over a rental, or jointly divide the income that comes from them. It is important to note however that in such a situation where a couple owns property together, the safest way is to have both their names on the titles but this however does not mean that if the property is not registered in both names, one party shall lose out completely. For more information please reach out to us.

When someone dies, issues of inheritance and succession arise. For most Ugandans, inheritance happens according to tradition.  The distribution of the deceased person’s property may either be according to the deceased person’s will (testate succession), or according to a prescribed set of laws for property division if the person died without leaving a will (intestate succession). When this happens their estate is distributed by the laws of intestacy which are governed by the Succession Act Cap 162

The law in Uganda protects women’s equal right to inheritance. However, in practice, women’s inheritance rights are often violated.

In the Acholi sub-region where we have a lot of activity in the recent past, people do not know or write wills. They tell us of the superstition that when you write (or even touch) a will, you are set to die.  Demystifying wills and changing their perspective has been a gratifying experience.

In 2017, the Constitutional court ruled that it is good to follow custom if customs treat men and women equal. That’s why it is not allowed for family members and customary leaders to make decisions about the deceased’s property that undermines women’s dignity and their equality to men. 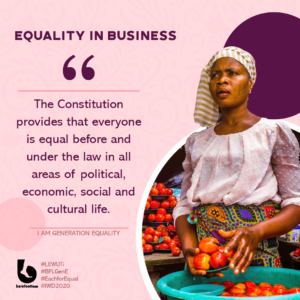 In 40% of economies, women’s early stage entrepreneurial activity is half or less than half of that of men’s. Globally, women are less likely to enter businesses and face more disadvantages starting businesses than men. Women are significantly limited in the ability to access loans, land or financial services which in turn prevents them from getting opportunities to raise startup capital. A major recurring constraint limiting women in business is access to finance. An estimated 63–69 percent of women-owned SMEs in developing economies are unserved or under-served by financial institutions. This includes institutional barriers to accessing funding such as high interest rates, lack of collateral guarantees, complicated processes and lack of business track record to secure financing.

Gender discrimination based on the cultural and societal norms of gender roles is another barrier to women entering business. It remains widespread, making women entrepreneurs less accepted or regarded in society and a lack of targeted support continues to restrain women in their path towards business ownership. Women are also less likely to be employers and on average globally, have three fourths of the rights men have.

All this leads to a lack of confidence necessary to withstand systemic bureaucracies because of hostility and criticism they receive from communities.

Women, like men, should be accorded equal opportunities to grow and sustain business ventures.

As of 2019, 29% of the people that approached BarefootLaw to access justice were women. As low as this number is, it was an increase from the previous years. This goes to show that less women had the ability to access our digital tools to in turn, access justice.

Our statistics show that the highest reported cases faced by women in 2019 were domestic in nature which includes issues of domestic violence, child custody etc.. and made up 34%.  15% of the cases brought to us by women are commercial in nature for example relating to business relationships, contracting etc. 11% of the cases brought by women were land related and land issues.. In contrast to this, the statistics of men’s cases revealed that commercial disputes followed by land cases and criminal cases. This goes to show that are still suffering the most from domestic disputes stemming from abuses they suffer, gender roles that have been imposed upon them. This is a clear indication that there is still a lot of work that needs to be done around women equality in Uganda.